Blackwood stars with 95 as West Indies stun England at Southampton

West Indian batsman Jermaine Blackwood hit a composed 95 to lead the visitors to an impressive four-wicket victory in the first Test against England at Southampton.

Chasing a challenging 200, West Indies found themselves in early trouble at 27 for 3. However, Blackwood and Roston Chase (37) brought the innings right back on track after Jofra Archer and Mark Wood got past the West Indies top order with their pace. 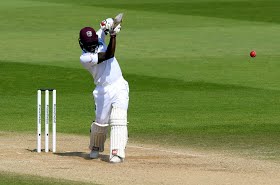 Blackwood missed out on a much-deserved hundred as he fell to Ben Stokes with the target just 11 runs away. Earlier, Shannon Gabriel claimed the last two England wickets to finish with second-innings figures of 5 for 75. England were bowled out for 313, setting West Indies exactly 200 for a 1-0 lead in the three-match series.

West Indies skipper Jason Holder described the win as one of their best. "Yesterday was the best day I had in Test cricket. All the bowlers toiled hard yesterday, and it was a hard-fought day of Test cricket," he said.

On the uncertainty surrounding the Test following COVID-19, Holder admitted they didn't know what to expect. "I don’t think any team knew. We had been sat at home doing nothing. We had time to prepare, but you never know. John (Campbell) took a blow today, but hopefully he will come through,” he added.

England's stand-in captain for the Test, Stokes stated that they weren't ruthless, and gave the opponents too many opportunities to stay ahead. "You have to believe that 200 is enough, and if you don’t, you’re already losing. We should have got more runs in the first innings. We weren’t ruthless enough to make our batting innings count, despite getting into good positions," he said.

"I would still have batted first, because first innings runs count. If we made 400-500 runs, we really would have taken it away," Stokes added.