A brilliant last over from Kieron Pollard and cracking half century of Hardik Pandya helped Mumbai Indians to sneak a 5-run win against KKR at Wankhede Stadium.

A brilliant last over from Kieron Pollard and cracking half century of Hardik Pandya helped Mumbai Indians to sneak a 5-run win against KKR at Wankhede Stadium, Mumbai to keep their Playoffs hope alive. Hardik Pandya played an impactful hand later in the inning which stretched Mumbai’s score to 171 which was looking about 140 in the 15th overs. 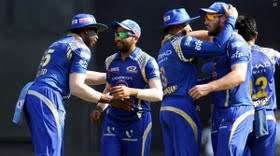 Asked to bat first, Mumbai Indians started their inning cautiously and managed only 29 runs in first five overs at the loss of one wicket of Parthiv Patel. Patel was looking good in his 21 runs where he struck three boundaries but he thrown his wicket away playing a lose shot at deep midwicket. Lendl Simmons and Ambati Rayudu too were not able to make any significant contribution with the bat. Rohit Sharma and Kieron Pollard added 32 runs together before Sunil Narine bowled Rohit with a beauty. Rohit was anticipating for the off spin but the ball turned away from him sharply and shattered his stumps. The game changed fully from here. The world hardest hitter of ball, Kieron Pollard was struggling to middle the ball but the new gun Hardik Pandya started his inning in flash and keep finding boundaries at will. Pandya hit eight boundaries and two massive six. His six over long on with straight bat was exceptional. Courtesy of his inning, Mumbai Indians reached 171/4 in their quota of 20 overs.

Kolkata Knight Riders came out all guns blazing in the chase of 171. Robin Uthappa and Gautam Gambhir started accumulating runs quickly. Uthappa hit three boundaries and a six before getting caught by Malinga at short fine leg off Harbhajan Singh. Manish Pandey soon got out by the direct hit of Simmons from short fine leg when he missed judge the single with Gambhir. Yusuf Pathan and Gambhir batted sensibly and brought KKR on track. Yusuf was not looking to just whack but he curbed his natural instincts. Both tried to attack the spinners Harbhajan and Suchith. Gambhir had a lucky escape when Pandya dropped him on 36 but he was not able to make full use of this and got bowled on the very next ball. Shakib(23) came and played few hard hits before getting out against the run of play. The hero of KKR of this decision Andre Russell could only managed two runs and was caught by Patel behind the stumps in the 16th over. 43 runs needed in the last four overs with five wickets in hand, game was looking in well control of KKR. Surya Kumar Yadav hit two boundaries off Vinay Kumar in the 17th over and took KKR closer toward target. The final over from Pollard made the difference, with 12 runs needed form six ball and the settled batsmen Yusuf was on strike. Pollard struck on his first delivery when Pathan played a lose pull shot and the ball went straight up in the air, Parthiv took it comfortably. Piyush Chawla missed the last three balls when six runs were needed off three balls to give 5 runs victory to Mumbai Indians.

Man of the Match: Hardik Pandya