Nasir Jamshed struck his third consecutive ODI hundred against India to set up a massive win for the visitors in the Second ODI at the Eden Gardens in Kolkata.

Nasir Jamshed struck his third consecutive ODI hundred against India to set up a massive win for the visitors in the Second ODI at the Eden Gardens in Kolkata. India displayed a good bowling performance by bowling out their arch rivals for 250 despite a strong opening stand of 141. However, in the run chase, the Pakistani bowling was simply too good to handle for the Indian batsmen. Pakistan with a crushing 85-run win capture the 3-match series 2-0 with one more ODI to be played.

India was hoping to exploit the overcast conditions when they asked Pakistan to bat first. But what they got instead was a strong opening stand between the in-form Mohammad Hafeez (76 from 74 balls with 10 fours) and Nasir Jamshed (106 from 124 balls with 12 fours and 2 sixes). It took 23.2 overs for India to find its first wicket but after getting that, they were plenty in store and despite a ton from Jamshed, Pakistan ended up getting bowled out for a modest total of 250. Ishant Sharma and Ravindra Jadeja were the most successful bowlers for India taking three wickets each. 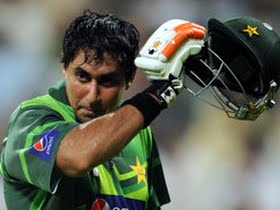 It was a solid start for India until Gautam Gambhir dragged a Junaid Khan delivery onto the stumps with the score at 42 for 1 in 9.5 overs. The Pakistani seamers then went onto make further inroads as India slipped to 70 for 4 in the 19th over. The hosts by this time were out of the contest and kept on losing wickets at regular intervals. Skipper MS Dhoni managed to survive and helped himself to an unbeaten 54 (from 89 balls with 4 fours and a six). India were bowled out for 165 in 48 overs.

Junaid Khan was outstanding swinging the ball at pace to take 3 for 39. Saeed Ajmal who came into the attack after all the damage was done ended with figures of 10-1-20-3. Nasir Jamshed got the Man of the Match award.

Toss and Teams: India has won the toss and asked Pakistan to bat first under overcast conditions in the Second ODI at the Eden Gardens in Kolkata. The hosts have made one change with Ravindra Jadeja replacing Rohit Sharma to boost the bowling. Pakistan are playing with the same XI that had won them the first match at Chennai.

Although the pitch has been under covers because of overnight rain, it is expected to play a lot better than the damp wicket at Chennai. The pitch is dry and expected to flatten out once the sun breaks through. Swing bowlers will find a lot of joy though because of the cloudy conditions.