IPL 8 Eliminator: Rajasthan, Bangalore in clash of the Royals

IPL 8 RCB vs RR Eliminator: Royal Challengers Bangalore and Rajasthan Royals will be contesting for a place in the second qualifier when they face each other in the eliminator clash at Maharashtra Cricket Association (MCA) stadium in Pune on Wednesday.

Royal Challengers Bangalore and Rajasthan Royals will be contesting for a place in the second qualifier when they face each other in the eliminator clash at Maharashtra Cricket Association (MCA) stadium in Pune on Wednesday. Both sides sides finished the group stage with the same number of points to their credit --16. However, it wouldn't matter much as whoever loses on the day will bow out. Finishing third or fourth in the league stage is a big disadvantage since the loser a team has to win two games to progress to the finals. This is why, Rajasthan, in particular will be disappointed that they finished so low after a memorable start to their campaign. 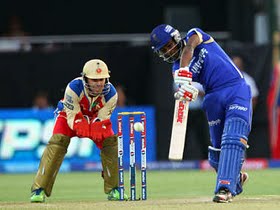 Rajasthan may have gone off the boil in the second half of the tournament, but they managed to overcome Kolkata Knight Riders thanks to a belligerent ton from Shane Watson, who has given up the captaincy duties. Rajasthan would be absolutely pleased that Watson, one of their key batsmen, will be going into the eliminator high on confidence. At the same time, a fair assessment of their batting will reveal that they haven't been as consistent as desired. There are too heavily reliant on their openers, Ajinkya Rahane and Watson. Skipper Steven Smith must come to the party, as must Sanju Samson and Stuart Binny. Rajasthan's middle and lower order definitely needs to contribute more. Against Kolkata, they couldn't cross 200 in spite of Watson's ton.

Rajasthan's bowling performance against Kolkata will also be a cause of worry. They never looked in any sort of control during their stint out in the middle, and only won because they had a big score to defend. Possibly, they took it easy because of the weight of runs, but there will be no place for complacency on Wednesday. Chris Morris stood out with his brilliant bowling effort. But for his 4 wickets, Rajasthan would have been in deep trouble. However, Brainder Sran proved to be highly expensive. Dhawal Kulkarni and Watson were among the wickets, but they went for a lot of runs. Binny is also a weak link as he sent down only one over in the last game.

Bangalore would be at a slight disadvantage since their last league match against Delhi Daredevils was washed out due to rain. The one point was enough for RCB to progress, but they would have liked another win under their belt. Having said that, Bangalore do not depend on form or momentum, and instead rely on individual brilliance. So, yet again, they will look up to the trio of Chris Gayle, Virat Kohli and AB de Villiers to fire. Each is destructive in his unique way, and even if two of the three fire against Rajasthan, the opposition would be under severe pressure. Since they comprise the top three, their batting effort becomes even more significant. Mandeep Singh is another attacking batsman they will look up to for runs if needed.

Bowling is definitely the weaker link in Bangalore's arsenal. Mitchell Starc has been their best bowler by some distance with his incisive bowling. Not only has he been among the wickets, but he has kept the runs down as well. Ever since he has comeback from injury, he has been the difference for Bangladesh. Yuzvendra Chahal has continued to make an impression as the lead spinner. The all-rounder in the squad, David Wiese, has done reasonably well with the ball, but the likes of Harshal Patel and Ashok Dinda haven't inspired much confidence.