Robin Uthappa was the star of the show for Kolkata Knights Riders as they beat Sunrisers Hyderabad by 17 runs in the match at Eden Gardens on Saturday.

Kolkata lost their openers early, but Uthappa, batting at number three, smashed 68 from 39 balls as Kolkata ended up making 172 runs, and eventually won the game. Uthappa stated he was happy to bat at number three as the team demand was of the same.

"The team requires me to bat at number three. I have taken the challenge on and am willing to do it for the team. It's a very important position," Uthappa said after the game. "If you lose wickets you need someone with experience to handle that kind of the pressure and ensure you don't lose another wicket,” he added. 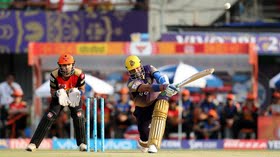 Sunil Narine again went into open but this time fell cheaply. "It's just one game. It's important for us to back him (Narine), if you don't back (a player), you tend to breed insecurity. I don't think we would do that. He will repay the faith. We have no doubt about that," Uthappa was quoted as saying in an NDTV report.

Uthappa also sung praises of the Eden surface which was relaid in February. "I was a little scared as to how the wicket would turn out. The first match was a really good track to bat on. This one was slightly slower. Since we have such an all-round side, it fits right into our scheme of things," he said.

"I did not expect the wicket to change so much in such little time. Really happy to see the wicket the way it is now. I must congratulate the curator and groundsmen for doing a phenomenal job,” he went on to add.

Uthappa credited Bhuvneshwar Kumar for some excellent death bowling in the game. "We were slightly less than we would like to end with. Need to respect the way Bhuvi bowled. We did the best we could. We had faith in our bowlers. At Eden, batting second is little easier and to have defended the score is commendable,” he went on to add.