The unpredictable nature of the T20 format came to the fore again during the clash between Sunrisers Hyderbad and Pune Warriors on Wednesday at the Sahara Stadium in Pune.

The unpredictable nature of the T20 format came to the fore again during the clash between Sunrisers Hyderbad and Pune Warriors on Wednesday at the Sahara Stadium in Pune. However, even the most diehard Sunrisers fans wouldn’t have bet on a win for their side after the visitors were rolled over by Pune for a paltry score. Amit Mishra had other plans in mind though. It was a magical spell by the leg-spinner, during which he claimed the last four wickets in one over, including a hat-trick, that made the impossible possible.

In spite of how well Mishra bowled, the harsh truth was that the game was Pune’s for the taking and they completely messed it up. They had six wickets in hand and under 20 runs to get at an easy pace of a run a ball. For some reason, the Pune batsmen tried to go for some outrageous strokes, and ended up losing their wickets one after the other. Skipper Angelo Mathews was among the culprits. He was well set and looked destined to take Pune over the finish line, but lost his cool without any rhyme and reason. The dismissals of the others were equally bizarre -- Mitchell Marsh and Abhishek Nayar, also falling while going for the big shots. 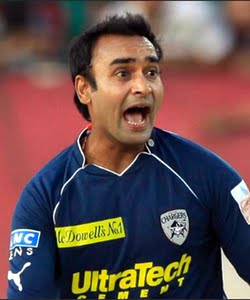 Whatever one makes of Pune’s inexplicable collapse, full credit to Mishra for the manner in which he stole the thunder from under Pune’s feat. Tailenders often find it difficult to deal with leg spinners, which is why Mathews presence out in the middle was crucial once Marsh and Nayar departed in quick succession. It proved to be so with Bhuvneshwar Kumar, Rahul Sharma and Ashok Dinda being no match for Misha, as Pune crumbed to a shock defeat.

Even as Mishra’s special effort with the ball was instrumental in the Sunrisers clinching the clash out of nowhere, he also played a significant role in them staying in the game with the bat. After the Sunrisers had collapsed under a brilliant spell of bowling from Bhuvneshwar Kumar, Mishra ensured that the Sunrisers got well beyond the 100 mark with a calculated innings, which was yet another exhibition of his growing prowess with the bat. In hindsight, Biplap Samantray’s defiant knock as well as the quick-fire cameo by Ashish Reddy turned out to be rather crucial, especially in the manner in which Pune gave it away.

While Pune were hapless with the bat in the later overs, another disappointing aspect was that their earlier batsmen, who got starts, did not carry on to register substantial scores. In fact, each and every one of their top six reached double figures, but not one of them managed to turn over their scores into the 30s. The most frustrating aspect from Pune’s point of view was that all this transpired even though there was no pressure of scoring at a fast pace. All credit to Mishra though for a wonderful all-round show.

Turning point of the game: Mathews’ dismissal for 20, which was the precursor to Mishra’s hat-trick.