Royal Challengers Bangalore thrashed Rajasthan Royals by 9 wickets to register their second win in this season at the Sardar Patel Stadium, Ahmedabad. The meager total to 130 run was never going to be enough for Royal Challengers as they chased that with 23 balls to spare. 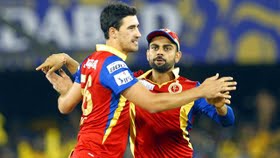 Put into bat first Rajasthan Royal made a cautious start. Though the orange cap holder, Ajinkya Rahane(18) was playing his shots but was soon trapped leg before wicket by Harshal Patel. Watson(26) too departed shortly after that. Rajasthan Royals never managed to put a partnership and where losing wickets in regular interval.

Though Karun Nair(16) and Steven Smith shown some resistance but the former ran himself out in process to take a tight double.

Smith(31) did struck at the crease for some time but failed to capitalize on his start as he fell when he was just looking to accelerate. Dinesh Karthik took a brilliant catch to get rid of him. No other Royals batsmen made any significant contribution as they only managed only 130 runs in their 20 overs.

Bowling is a weak link of Royal Challengers, but turned out to be their strong link in the leadership of Mitchell Starc(3-22) today. Harshal Patel and Yuzvendra Chahal also chipped in with two wicket a piece.

Gayle(20) came back in the playing eleven for this game, came out to open with skipper Virat Kohli. They started the fire form the first over. Gayle struck three boundaries and a six before poking Watson’s delivery to Sanju Samson.

Virat Kohli(62*) and AB De Villiers(47*) held the inning together and played some delight full strokes. They finished the game for their team and coupled a partnership of 98* runs together. The class of these two batsman made the bowling of Rajasthan Royal look ordinary today. Kohli’s three boundaries and three sixes along with De Villiers six boundaries helped Royal Challengers Bangalore to beat the home side with nine wickets in hand.

Despite losing two consecutive matches, Rajasthan Royals are still at the top of the points table. With this win now, Royal Challengers Bangalore now are ahead of Mumbai Indians and Kings XI Punjab, they are on the sixth spot.

Player of the Match: Mitchell Starc