India A’s batting was completely exposed by Windies A

The first unofficial Test played between India A and West Indies A at Mysore was completely dominated by the visitors.

The first unofficial Test played between India A and West Indies A at Mysore was completely dominated by the visitors. Although the hosts would have been disappointed to have come up with a poor showing at home, the fact was that West Indies had players with better pedigree, in fact quite a few of them have represented their side at the top level. This experience of the Windies players helped them in their cause eventually. On the contrary, the relative inexperience in the India A squad came to the fore, and they never quite matched the visitors’ steps. 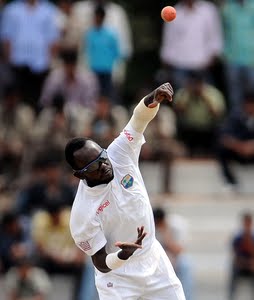 Right from day one, Windies A demonstrated who the boss was. Although they lost Kieran Powell early, Kraigg Brathwaite and skipper Kirk Edwards ensured that West Indies A did not wilt under the pressure of an early wicket. Both adopted sound technique and patience in dealing with the conditions. Their marathon partnership wore down the India A bowling, and laid the platform for a big first innings total. If anything, both Brathwaite and Edwards would be cross with themselves for missing out on well-deserved tons. At the same time, they did put their names back in contention for the Test spot.

Apart from the two Ks, there were a couple of other heartening performances for West Indies A with the bat. Assad Fudadin carried on the good work for his side with a mature innings which saw to it that Brathwaite and Edwards’ splendid efforts did not go in vain. The fact that he batted till the very end meant that he spent a lot of time out in the middle and allowed the others to plays around him. Nikita Miller and Chadwick Walton came up with good supporting acts lower down the order. Parveez Rasool grabbed a five for the bowling side but did not have much in the form of assistance.

India A desperately needed a good start to take some pressure off them. But, it wasn’t to be the case. Manpreet Juneja was the only one who stood up to the West Indian attack even as the others failed around him. Juneja proved, just like the West Indian batsmen, that it was possible to bat for a prolonged period on the surface. But, what India A needed was for someone else to also come up with a similar knock. There were a few positive signs as opener Lokesh Rahul, and later Harshad Khadiwale got starts, but they failed to carry on. Like with their batting, West Indies A impressed with the ball as well. Veerasammy Permual and Nikita Miller combined to grab nine wickets.

West Indies A ticked another box when they batted second as Powell registered a breezy half-century. Left with a highly competitive target to chase, India A needed their batsmen to fire, but they just did not possess the arsenal for the same. For the second time in a row, Juneja was the only batsman who was up to the task. Skipper Cheteshwar Pujara failed in both knocks which did not help the side’s cause. West Indies A’s batting and bowling totally outdid the hosts, in what was a disappointingly one-sided affair.