Sunrisers Hyderabad displayed a clinical performance in all department of the game to secure a massive win of 85-run against Mumbai Indian at Visakhapatnam which the latter has selected their second home ground.

Sunrisers Hyderabad displayed a clinical performance in all department of the game to secure a massive win of 85-run against Mumbai Indian at Visakhapatnam which the latter has selected their second home ground. Sikhar Dhawan scored an unbeaten 82 and was helped by Warner’s 48 and Yurvaj’s cameo of 39 to post 177 runs on the borad. In chase, Mumbai Indian went nowhere and their batting collapsed and non of their batsmen were able to rescue the slide and they were bowled out for 92.

Earlier in the day, Rohit Sharma won the toss and elected to bowl first which has been the norm of this season. The pitch was looking greenish and it would have helped the fast bowlers. The start for Hyderabad was not blistering as the bowlers bowled in good areas but the left-handed kept running hard between the wickets to keep scoreboard moving. But soon their skipper found some touch and kept hitting few boundaries here and there. The introduction of spin didn’t help either to the hosts as Harbhajan Singh was hit towards cow corner for six by Warner and he also bisected the off side field for four. The pair added completed fifty runs at the end of powerplay. When David Warner was on brink of his half-century he failed to clear the long-off boundary off Harbhajan Singh, ending a partnership worth 85 runs off 59 balls. The off-spinner picked up one more wicket, that of Kane Williamson. Skipper Rohit Sharma took a diving catch a short mid-wicket. The couple of wickets put the brake of scoring and visitors could only manage 17 runs in four over after Warner’s dismissal. Yuvraj started off slowly and took his time to get use to the condition which helped him in the last four overs. Dhawan completed his fifty and then took on Bumrah in the 17th over for three boundaries. Dhawan also hit a six and a four off Bumrah in the penultimate over of the inning. Yuvraj was out hit wicket in the last over of the inning off McClenaghan where he conceded only seven runs to prevent Sunrisers crossing 180. 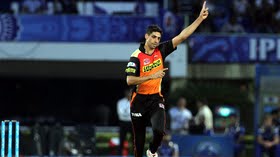 When Mumbai Indian started the chase they lost couple of wickets on successive deliveries. First Parthiv Patel was trapped in front of the stumps off Bhuvneshwar Kumar’s inswinger. And then on very first delivery of Ashish Nehra, Rohit Sharma went for an expensive drive, the ball took the bat’s edge and went on to crash the stumps. Krunal Pandya was promoted up to the batting order and hit boundary and seemed they the pair of Rayudu and Pandya will arrest the slide but it didn’t happen. The pair had added 23 runs before Nehra’s short delivery took Rayudu. From 28 for 3 they were reduced to 30 for 4 when Naman Ojha put an full stretch dive to take an splendid catch of Jos Butler off Nehra. Wicket keep trembling as a flick from Krunal Pandya went straight to Dhawan at mid wicket off Sran. The rest of the left work was done by Bangladeshi bowling sensation and he also claimed three wicket to bowl out Mumbai Indians for 92 runs.