With Shikhar Dhawan unavailable for the first three one-dayers against Australia, Ajinkya Rahane is likely to open the batting

With Shikhar Dhawan unavailable for the first three one-dayers against Australia, Ajinkya Rahane is likely to open the batting for the India in these games. Dhawan won’t be part of the first three matches due to his wife's illness.

Speaking about the same, the other opener Rohit Sharma was quoted as saying in an NDTV report. "We have great bench strength. Of course, the absence of Shikhar will be felt. The kind of form he was in of late, he had a big role to play in the team's recent achievements. Right from the Champions Trophy till the last tour of Sri Lanka, he has had impactful performances for the team. But, we have got a few guys to replace him.” 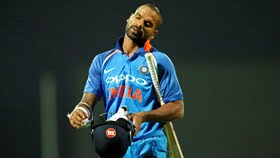 On his replacement, Rohit added, "Ajinkya is one of them. He had a great run in the West Indies and won the man of the series award. He can come and take up that role anytime. We have got guys who can take on the role and perform well.”

Asked if he will change his game plan owing to his change of partners, Rohit said, "The partner doesn't matter, to be honest. It's what the conditions have to offer, what sort of pitch you are playing in. At the end of the day, you have to give your team a good start."