MI Vs KKR: Dwayne Smith’s blitz set up the chase perfectly for Mumbai

Mumbai Indians (MI) managed to put up a skilled effort with the bat, which helped them overcome a tough challenge from Kolkata Knight Riders (KKR) at the Eden Gardens on Wednesday, and, simultaneously, also aided them in putting a stop to their losing run...

Mumbai Indians (MI) managed to put up a skilled effort with the bat, which helped them overcome a tough challenge from Kolkata Knight Riders (KKR) at the Eden Gardens on Wednesday, and, simultaneously, also aided them in putting a stop to their losing run, which was beginning to be a serious cause of concern. Mumbai were first successful in restricting Kolkata to a gettable total after, at one stage, it seemed, the hosts would run away to a Gayle-like score. Then, with the bat, they found the right men on the right occasions to take them through to safety.

Mumbai opener Dwayne Smith, who was opening the innings in the absence of Ricky Ponting, made his presence felt right away. Chasing a total that was competitive, Mumbai needed a reasonable start. The presence of Smith out in the middle became ever more significant after the visitors yet again lost Sachin Tendulkar early. What Smith did very well during his innings was to not get bogged down. He continued playing the big shots from one end, even as the Mumbai lost the major scalp of the in-form Dinesh Karthik at the other end. 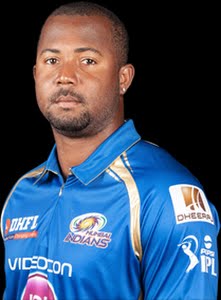 Smith’s blistering knock, which featured as many as five sixes, made sure that the run rate was under control for most part of the chase, which made the job easier for the latter batsmen in the innings. Even after Smith fell following a superb knock, Rohit Sharma, the skipper for the game, and the big-hitting Kieron Pollard continued the good work for Mumbai. Both brought out their big strokes at opportune moments while rotating the strike very well for most part of the innings. The chase got a bit too close in the end, but again Mumbai had the men in Harbhajan Singh and Ambati Rayudu to see them through.

As for Kolkata, it was yet another case of so near yet so far for them. They began in exceptional fashion, Yusuf Pathan blazing his way to 19 from 5 balls, opening the innings. However, at a time when Kolkata needed a much bigger knock from him, he gave it all away off the sixth ball he faced. Even so, Pathan had set a scintillating platform for Kolkata, on which they should have capitalised. Instead, they allowed the game to slip away, and gave Mumbai a major opening.

The most disappointing aspect of Kolkata’s innings was that most of their batsmen got starts but none of them carried on to get big scores. Gambhir, Kallis, Tiwary Morgan, all chipped in but not one of them could get into the 40s. The loss of wickets at regular intervals hurt Kolkata’s progress. Further, an excellent spell by Lasith Malinga towards the end of the innings hurt their chances of putting up a match-winning score. Malinga’s yorkers were lethal as ever and Kolkata had no answers.

Turning point of the game: Eoin Morgan’s dismissal for 31 in the 18th over. Kolkata scored only 13 runs in the last two overs following Morgan’s wicket.