An eight-overs-a-side game in more like a lottery rather than a cricket match, where few players come in and try their luck. It goes without saying that the better side doesn’t always win in such contests

An eight-overs-a-side game in more like a lottery rather than a cricket match, where few players come in and try their luck. It goes without saying that the better side doesn’t always win in such contests – one who hits the jackpot often does. On Saturday though, in Royal Challengers Bangalore’s do-or-die clash against Chennai Super Kings at Bangalore, it must be said that the better side did come up trumps. After the rain subsided, Bangalore were desperate for a win, and it showed in the manner in which they came out, all guns blazing. As for Chennai, they looked less motivated, having already qualified for the play-offs.

It was one man who basically took the game away from Chennai. Batting first, Bangalore needed a blistering start to put Chennai under pressure, and skipper Virat Kohli took the smart decision of opening the innings instead of Cheteshwar Pujara. More importantly, he made sure that the ploy worked. Being the captain, Kohli not only led from the front, but played a smashing innings that only someone with supreme confidence in his own ability can do. In the past couple of seasons everyone has seen what Kohli is capable of, and on Saturday, Kohli only reiterated his prowess under pressure. 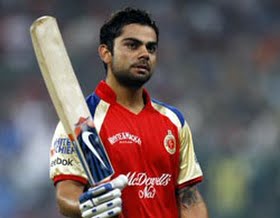 Kohli was superb, and took on each and every bowler with the highest level of authority. This was the most impressive aspect of his innings. Be it R. Ashwin, Chris Morris or Dwayne Bravo, Kohli took them all to the cleaners. The bowlers just had not answers to his brutal attack. The Bangalore captain cleverly faced more than half of eight overs on offer, and made maximum use of the same. Chris Gayle also chipped in, his four massive sixes aiding Bangalore in putting up a sizzling score. Moises Henrqiues’ three consecutive boundaries ensured Bangalore set an improbable target for Chennai.

Unlike Bangalore, Chennai weren’t proactive. They did not need to, of course, but sending Dhoni to open would have been the ideal choice. Instead, the visitors stuck to their usual opening pair of Mike Hussey and Murali Vijay. And once, Hussey fell cheaply, the writing was very much on the wall. Also unlike Chennai, Bangalore’s bowlers were much more difficult to get away. Zaheer Khan was particularly effective, taking out the big men at the top. Dhoni played some masterly strokes towards the end, but the match was over much before even before he took arrived at the crease.

Turning point of the game: RCB’s decision to open with Kohli, who blasted 56 not out from 29 balls.