Rahul Dravid, India's under-19 coach, believes it won't be easy for the team members to make it to the next grade unless they perform consistently.

Rahul Dravid, India's under-19 coach, believes it won't be easy for the team members to make it to the next grade unless they perform consistently.

"The challenges and the hard work start from here. The hard work begins for them and for us as well, as to how we manage these boys over the next few years. Even if not a lot of them go on to play for India, it can happen,” said Dravid at a felicitation function in Mumbai. 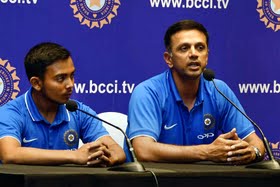 "It depends on the number of players who are performing. If they go on to have successful first-class careers, then from there on it becomes a stepping stone for international cricket," he added.

Dravid also went on to opine that the real work for the team starts now. "I think, just the whole preparation and planning that has gone into, I won't say necessarily this World Cup, but over the last 14-16 months is a good process that we put in place and like everything else you have to keep refining it, getting better at it and keep improving on that process," said Dravid.

India Under-19 beat Australia in the U-19 World Cup final by 8 wickets.