India went down to Australia by six wickets in the Women’s World Cup 2022 clash at the Eden Park in Auckland on Saturday. India batted first after winning the toss and posted 277 for 7 on the board. Skipper Mithali Raj led the way with 68 while Yastika Bhatia contributed 59 and Harmanpreet Kaur remained unbeaten on 57. Pooja Vastrakar was run out on 34 off 28

Australia were brilliant in the chase as skipper Meg Lanning top-scored with 97. Alyssa Healy scored 72 off 65 opening the innings and featured in a first-wicket stand of 121 with Rachael Haynes (43 off 53). Ellyse Perry and Beth Mooney also chipped in with cameos as Australia chased down the target with three balls in hand.

Following the record chase, Australia qualified for the last four stage of the event while India’s chances were dented severely after their third loss. Speaking after the defeat, Bhatia said, "They (Australia) have been playing superb cricket, everyone in their team takes responsibility.” 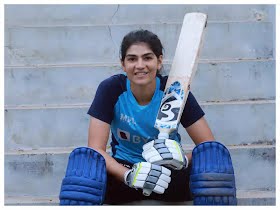 "It was Meg Lanning (97) who just took it on herself to take the team over the line. Her intent was quite clear from the beginning, though she got out. Still, we came pretty close, it could have gone either way, we could have crossed the line," she added.

Even though India lost to Australia, Bhatia claimed that the in-form team are beatable. She commented, "It's nothing like they can't be beaten. We can do it for sure. Our team is really good, we can do it in the semis or finals. I think it was a defendable total. Credit to the Aussie batters the way they started. Healy and Hyanes started aggressively.”

Indianow have to win both their remaining two matches to hope of qualifying for the semis. They will face Bangladesh at Hamilton on Tuesday and South Africa on March 27 in their last league game.