World Cup 2019: Rohit Sharma credits his success to this significant person in his life

After a century against South Africa and a half-century against Australia, Rohit Sharma continued his dream run with yet another hundred in the World Cup

After a century against South Africa and a half-century against Australia, Rohit Sharma continued his dream run with yet another hundred in the World Cup clash against Pakistan. His hundred was the key as India posted 336 and then held down the Pakistan batting to easily make it 7-0 in India-Pakistan contests.

Post the victory, Rohit said that his newborn daughter has put him in good space and has a lot to do with his success. "I think it's just the space I am in right now. It's a very good phase of my life. Having a daughter, a newly born daughter in my life actually has put me in a good space," Rohit said in the press conference on Sunday.

"I think I'm enjoying my cricket, coming off a great IPL campaign and then starting off here. We always know how important it is to start well. So the focus was always to start well and then see where the team is heading and then the individual. As a team, we're heading in the right direction. For us, it is important to just keep ticking all the boxes, and I think, as a team, we have done that most of the time," he went on to add.

The big challenge for Rohit was to deal with his nemesis Mohammad Amir. The left-hander pacer again shone with the first spell of 4-1-8-0. However, Wahab Riaz and Hasan Ali eased the pressure on India. Pakistan also tried to bounce out Rohit but the tactics misfired. 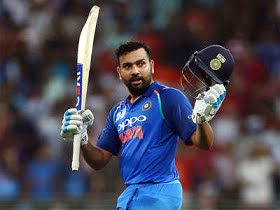 Discussing Pakistan's strategy, Rohit said, "I don't know what happens in their team meeting, whether it's to bowl up or bowl short. They bowled, I guess, pretty well in the first half. The first 10 overs, they bowled pretty well. Of course, we know in England, once you're in, it's very hard for the bowlers to come back and there's not enough room for error. If you make an error, you're going to get punished. That is pretty simple. We've seen it over the years in this part of the world.

"Of course, certain games, certain conditions will challenge you as a batsman, but it did us in the initial phase because the shot making wasn't that easy. But I really can't read into what was going in their mind, whether to bowl up or to bowl short. They did bowl up a fair amount, but then, again, as a batsman, you are ready to just pounce on it when given a ball to your strength. I think it is my strength when someone bowls short to me."

India has now beaten Pakistan in all the seven clashes that the teams have had in World Cups.