During the first T20I against the Windies, in Sylhet, Bangladesh captain Shakib Al Hasan was found to have breached breaching Level 1 of the ICC Code of Conduct and has been fined 15 per cent of his match fee.

During the first T20I against the Windies, in Sylhet, Bangladesh captain Shakib Al Hasan was found to have breached breaching Level 1 of the ICC Code of Conduct and has been fined 15 per cent of his match fee. 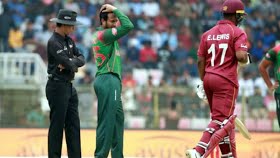 Shakib was found to have breached Article 2.8 of the ICC Code of Conduct for Players and Player Support Personnel, which relates to “showing dissent at an umpire’s decision”.

In addition to this, one demerit point has been added to the disciplinary record of Shakib, for whom it was the second offence since the introduction of the demerit system in September 2016. Shakib now has two demerit points, having been handed one demerit point for an offence during a T20I against Sri Lanka in March this year.

The incident involving Shakib happened in the 14th over of Bangladesh’s innings when the left-hander, who was at the striker’s end, showed dissent at the umpire’s decision of not calling a wide when he first shouted at the umpire and then got involved in a prolonged discussion.

After the end of the match, Shakib admitted the offence and accepted the sanction proposed by Jeff Crowe of the Emirates ICC Elite Panel of Umpires and, as such, there was no need for a formal hearing.

The charge was levelled by on-field umpires Saikat Sharfuddoula and Tanvir Ahmed, third umpire Masudur Rahman and fourth umpire Gazi Sohel. Level 1 breaches carry a minimum penalty of an official reprimand, a maximum penalty of 50 per cent of a player’s match fee, and one or two demerit points. The 3rd and deciding match of the 3 match series will be played in Dhaka on Saturday, and, with the series level at 1-1, this has now set up the third and final T20I very nicely. It is anybody’s guess as to who is going to win but, you will probably see that Bangladesh are favourites to win.

Shakib Al Hasan has been exceptional in this series for Bangladesh as he has been doing everything that the team can ask for. He scores runs and scores them quickly. He does not give away runs and takes wickets as well. The skipper is ticking all the boxes right now and the team is riding on his heroics. If he can prevent himself from being banned, he will undoubtedly lead Bangladesh in the World Cup next year in England.