6 Top outstanding batsmen who excelled in 2019 and who will dominate the coming 2010 year.

The year 2019 has been great for cricket. What with a thrilling first World Cup win by England, an impressive run by New Zealand to the runners up position and a fantastic display by India in the World Cup before crumbling at the semifinal? The ICC World Cup provided the highlight for cricket fans but there were standout performances by individual players both throughout the year. Here are some of the outstanding batsmen who excelled in 2019 and who will dominate the coming year. 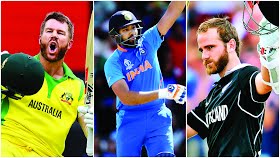 New Zealand was fantastic at the ICC World Cup and this is thanks to the leadership of their skipper Kane Williamson. He scored runs in every game carrying the team on his shoulders. He managed to score 578 runs at an average 82.57 and is now the third world cup skipper to register back-to-back centuries. Kane has much more to give to cricket in the coming year.

His team might not have made a big impression at the ICC World Cup but Shakib Al Hasan did. At 32, Shakib gave fans record-breaking performances with his all-round class ending the tournament with 606 runs.

This was better than Sachin Tendulkar’s maximum runs scored (586 runs in 2003 World Cup) in the group stages of the World Cup. To make it better, he is now the first player to score 500 runs and claim ten wickets at the same world cup. If he can overcome the nagging injuries, Shakib is a batsman to look out for in 2020.

Jason Roy was the opener for England and together with Bairstow, his partner played an important role in the team’s success. His score of 85 during the semifinal against Australia provided the platform England needed to burst into the final. He’s one of the standout batsmen who will have a great time come 2020.

Joe Root was fantastic with the bat and had a great world cup helping his team to the title. His ability to play spin stood out and he did it better than anyone in their batting order. In 11 innings, Root managed 56 runs at a decent average of 61.77.

After a one-year ban, David Warner had a lot to prove he was still one of the best in the sport and he did this in style. He had a phenomenal world cup scoring an impressive 43 against England in the warm-up game. Warner helped the Aussies as best as he could with his 647 runs in 10 innings at an outstanding average of 71.88. Warner is truly back.

Rohit Sharma finally got the chance to shine at the world stage during the 2019 ICC World Cup in England. His patience with the ball saw him scoring runs easily before setting the record for most centuries (five) in a single World Cup. Against Australia, Rohit became the fastest (37 innings) to 2000 runs against any team breaking the record set by Tendulkar’s of doing the same in 40 innings. He still has a lot to offer the Men in Blue come 2020.

With the year 2019 coming to an end, there are many good memories for cricket fans to take to the New Year. These memories include some great performances by these batsmen who made every game worth watching. These are some of the cricket players who will reign in 2020 and help their teams to titles