Gujarat Lions will be keen to get back on the winning track as they face Delhi Daredevils in match number 31 of the Indian Premier League at Rajkot on Wednesday. Gujarat went down to Kings XI Punjab, by 23 runs, in rather shocking fashion in the previous encounter. While that was a definite setback, Gujarat remain on top of the points table with 12 points from eight matches, and will look to put the disappointment of the previous match behind them. Delhi, on the other hand, got the better of Kolkata Knight Riders by with an impressive all-round display on Saturday.

Gujarat failed against Punjab because their explosive openers fell early. After Aaron Finch’s loss to victory, Brendon McCullum and Dwayne Smith have played significant roles in Gujarat’s rise to the top. Punjab however were successful in getting them without much damage done, and that made a big difference. When they take on Delhi, McCullum and Smith will be keen to get back among the runs. They have a strong batting line up, with Suresh Raina and Dinesh Karthik to back up the openers. After a poor start to the tournament, Raina is beginning to raise his game, while Karthik has also made useful contributions. 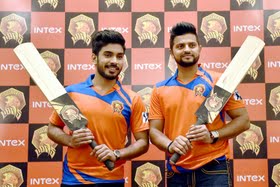 Even amidst all the positives, the batting form of Ravindra Jadeja and Dwayne Bravo would be a massive worry for Gujarat. Neither has played even one innings of significance, and they will be looking to set the record straight against the Daredevils. Both Bravo and Jadeja have been successful with the ball, but with the willow they have only managed a little over 50 runs so far. Lions will, however, be pleased with their bowling effort against Daredevils. Shivil Kaushik surprised with three wickets even as Praveen Kumar and Dhawal Kulkarni impressed.

Although Delhi lost to Gujarat the last time these two teams meant, there wasn’t really much to choose between the sides as the margin of victory was merely one run. Delhi would be looking to take revenge. They also go into the match high on confidence having defeated Kolkata by an impressive margin of 27 runs. Karun Nair was the star of the show, with 68 from 50 balls. Sam Billings also played a crucial role with a half-century. In the bowling, skipper Zaheer Khan finally got his act right with excellent figures of 3 for 21.

Above all though, it was Carlos Brathwaite’s all-round effort that was the biggest positive for Delhi. Even since the World T20 final, there have been high hopes from the Windies all-rounder. Until Saturday, he hadn’t lived up to the expectations. But, against KKR, be played a much-expected whirlwind knock, smashing 34 from 11 balls. He was expensive with the ball, but did end up claiming three wickets, enough to win him the man of the match award. Mohammad Shami, Chris Morris and Amit Mishra all played their part in keeping things tight, and tightening the noose on Kolkata Knight Riders.