…And the real India stood up!

What a contrasting performance it was from India against arch rivals Pakistan in comparison to their contest against Australia just a couple of days back.

What a contrasting performance it was from India against arch rivals Pakistan in comparison to their contest against Australia just a couple of days back. And if one is wondering what drastically changed in the time period, the answer is actually the team’s thinking. India played its best side, which meant bringing back Virender Sehwag at the top of the order even though he wasn’t in form. Also, the preference of Laxmi Balaji over Harbhajan Singh was a bold move, but a sensible one nonetheless. The paceman has a lot of T20 experience, which M S Dhoni has utilised well for Chennai Super Kings in past IPL editions. Still, only team alterations weren’t going to help India. They needed to perform to potential, which is exactly what they did. 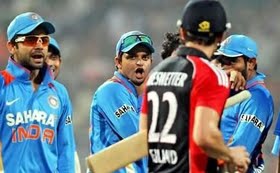 The start with the ball wasn’t great for India, with Zaheer Khan spraying it to both sides of the wickets. To their credit, however, India fought back well. Once Irfan Pathan sent back the dangerous Imran Nazir, India seized control of the situation rather well. Unlike in the game against Australia, there was no rain around, which reduced the unwanted burden on the spinners.

R. Ashwin definitely seemed to have learnt from his mistakes against the Aussies. Instead of trying to get cheeky, he stuck to his game plan, and was suitably rewarded. Yuvraj Singh’s performance with the ball was even more heartening. Though not 100 per cent fit, he is slowly but surely getting there, and his performance on Sunday would make him feel better. He also contributed with the bat, remaining unbeaten at the end, giving Virat Kohli company, and effected his trademark run out with a direct hit. On the day, India also planned well. When Pakistan sent in Shahid Afridi as pinch hitter, Balaji worked him out with a short ball, as the smasher hit the delivery exactly where India had placed the field. It was one of the many examples of good thinking demonstrated by India on the big day.

Thanks to a wonderful all-round effort by India in the field, Pakistan were restricted to a gettable total. Still, India needed to get the runs while chasing. Losing Gautam Gambhir early was hardly the perfect start, butVirender Sehwag and Virat Kohli soaked in the pressure well – there would have been a lot of it considering this was an Indo-Pak clash, and a do-or-die one for India at that. Kohli once again proved why he is so critical to India’s cause. He guided the Indian innings along in a sedate manner, as he has done so often in the past year. One really can’t praise the experienced youngster enough. As for Sehwag, he got a well-deserved opportunity, and got a start as well. It was his partnership with Kohli that calmed the nerves for India following Gambhir’s early exit. However, it was rather disappointing that he threw his wicket away instead of converting his start into a substantial knock. One can only wonder whether he’s lost the hunger to succeed.

Overall, it was a near perfect performance from India, something they must try and replicate against South Africa on Tuesday.