Had to alter the length to get the pink ball to swing: Ishant Sharma after five-for in Day-Night Test

Ishant Sharma, who became the first India to claim a five-for in a Day-Night Test match, admitted after the game that the pink ball did not swing initially

Ishant Sharma, who became the first India to claim a five-for in a Day-Night Test match, admitted after the game that the pink ball did not swing initially and that the bowlers had to alter the length to get the ball to move.

Ishant led the way for India on a historic day with 5 for 22, his 10th five-wicket haul, and first at home in 12 years. Umesh Yadav and Mohammed Shami picked up the other five wickets as Ravichandran Ashwin wasn’t even called on to bowl.

Speaking after the game, Ishant conceded that Day-Night Tests are a different ball game. “It was a lot different from the red ball. Initially, we bowled the right length but did not get any swing. Then we realized at what length we have to hit and we discussed among ourselves and found out the right length to bowl with the pink ball.” 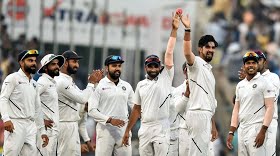 Ishant is part of India’s formidable pace attack that comprises Shami, Yadav and Jasprit Bumrah (currently injured). In fact, Friday was only the fourth occasion in Indian history when pacers picked up all ten wickets to fall in a home Test.

“I’m enjoying my cricket right now. Initially, I used to take more pressure on my performance, to take wickets and beat batsmen so many things. Now I don’t think much. Obviously, I’ve got experience now so I adjust my length according to the conditions quickly,” Ishant added about his five-for.

The fast bowler was asked about the fact that he is not in the scheme of things in the shorter formats any longer. However, Ishant replied that he doesn't worry about things that are not in his control.

“Yes, it feels sad sometimes. But I’ve reached a stage in life I’ve stopped worrying about those things. I’m now 31 and if I start worrying about in which format I’m in then I cannot perform.

“I just want to play, be it Ranji Trophy or India. That’s a simple thing. If you enjoy playing you do well. If you start cribbing for small things you can never improve,” the lanky pacer added.

After the Indian fast bowlers combined to clean up Bangladesh for 106, half-centuries from Cheteshwar Pujara and Virat Kohli took India to comfortable 174 for 3 at stumps. During the course of his innings, Kohli became the fastest to 5,000 runs as Test captain.