Team India opener Rohit Sharma hit a smashing hundred on Day 3 of The Oval Test against England as the visitors ended the day in ascendancy, at 270 for 3. Rohit hit 127 off 256 balls and featured in a 153-run stand with Cheteshwar Pujara (61) as India ended Day 3 with a lead of 171 and seven wickets in hand. Indian captain Virat Kohli (22 not out) and Ravindra Jadeja (9 not out) were at the crease when bad light forced stumps.

India resumed the day at 43 for no loss and the openers Rohit and KL Rahul took the score to 83 before the partnership was broken. James Anderson got one to nip away from Rahul after pitching and found the batter’s edge. The umpire hadn’t raised his finger. However, England were confident and got the scalp using the DRS. Despite snicko showing a spike, Rahul was unconvinced and felt the bat had brushed the pad as he headed back to the pavilion for 46. 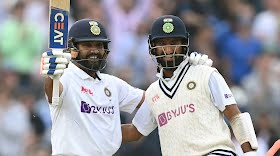 Rohit and Pujara then batted with defiance. The former was lucky as Rory Burns dropped him for the second time in the match. Batting patiently, he went on to reach his slowest fifty off 145 balls. The Mumbai batter, however, gained momentum once he went past the half-century mark. His hundred came up in a far more flamboyant style as he launched Moeen Ali over the ropes for a maximum.

On the other hand, Pujara also batted with greater confidence. Just like at Headingley, he looked assured and played his strokes freely. He placed Craig Overton past fly slip for four to bring up his half-century. Earlier, the India No. 3 twisted his ankle badly while going for a run but strapped the area and kept on playing.

Rohit and Pujara took India to 199 for 1 at Tea, a lead of exactly 100. It was the new ball that kept England in the game again. Pacer Ollie Robinson took out both the set batters with the first over of the second new ball. It will be now up to the likes of Kohli, Jadeja, Rahane and Pant to carry forward the good work of Rohit and Pujara and put India in a commanding position on Day 4.