pitch report : This will be England's first day game in the tournament so they will not have to deal with the dew that has been such a factor. 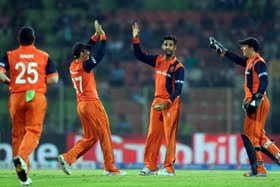 If Broad is fit to play, there will be five survivors from the 2009 meeting - three for England (Broad, Bopara and Morgan) and two for Netherlands (Borren and Seelaar).

This has been England's most successful World T20 with the bat: they are averaging 32.64 per wicket and their run rate is 9.35

Tom Cooper's 223 runs in this tournament is the second-most by a Netherlands batsmen in either a World T20 or a World Cup, behind Ryan ten Doeschate's 307 at the 2011 World Cup